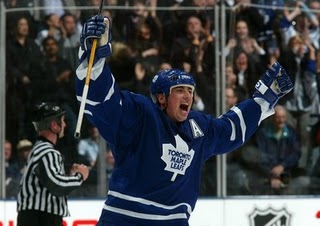 Where will Kaberle be playing next season?

All signs are pointing in the direction of Kaberle leaving Toronto. A source very close to the Maple Leafs say the offers are getting better and better each passing hour. Burke said he wanted a top-6 foward in the deal but has also said he would consider 1st and 2nd round draft picks and prospects for Kaberle. Here is my evaluation of the possible trade situations of each team rumored to be interested in Kaberle. Then my decisions for the most logical cities that Kaberle could play in.

*Check in all night for updates at the bottom, there will be constant movement back and forth for Kaberle.

Boston Bruins – The Bruins are looking for a top defenseman to play with Chara or Seidenberg. They have been trying to shop Michael Ryder and Marc Savard this offseason also. This would highly interest Brian Burke because both played with Phil Kessel and had great chemistry together. Either one of those players and a pick or prospect would land Kaberle in Boston.

Los Angeles Kings – Since failing to beat out New Jersey for Ilya Kovalchuk, the Kings have moved on to try to capture their consolation prize: Thomas Kaberle. Kaberle would fit perfectly in the King’s young and talented group. Paired along with the Norris nominated Drew Doughty, Kaberle would excel in both the offensive and defensive aspects of the game along with bringing his keen ability to move the puck and pinpoint accuracy shot to the powerplay. Acquiring Kaberle would require parting with either Simmonds, Stoll, or Williams and a pick or prospect.

New York Islanders – The Islanders, A young, but talented team in the middle of a rebuilding phase, would be a good fit for Kaberle. He would pair well with Mark Streit and be the backbone of the team’s powerplay. To acquire Kaberle, they would have to trade away some of their young talent possibly Bailey or Schremp, draft picks, or other prospects.

San Jose Sharks – Many say San Jose is the favorite to land Kaberle. Imagine the shut down defensive pairing of Dan Boyle and Thomas Kaberle together. Even scarier, try to imagine a powerplay that featured Heatley, Thornton, and Marleau on foward and Boyle and Kaberle on the back end. Fierce. To acquire Kaberle, the Sharks would most likely have to part with Clowe, Pavelski, or Setogushi and a prospect or pick.

Tampa Bay Lightning – Steve Yzerman is looking to make another splash this summer by acquiring Kaberle. Though the team is already stacked on defense, Kaberle would bring the puck moving, offensive force that would fill Paul Ranger’s spot. To acquire Kaberle, Yzerman would have to deal either Ryan Malone or still RFA Steve Downie who both had breakout years last season.

Washington Capitals – The Capitals who won the President’s Trophy last year are also in the hunt for one of the game’s best defensemen. Kaberle, an offensive defenseman, would fit in perfectly in the Capital’s high power offense. To accquire Kaberle, the Capitals would have to trade a top six foward, Semin or Fleischman, along with a prospect or draft pick.

Even though Kaberle would be a great fit for all of these teams, it isn’t about where Burke wants him to go. Rather its who wins the bidding war. Of all these teams, where is the most logical team for Burke to make a trade with? Though it all depends on how much a team is willing to give up for Kaberle, my favorites for acquiring him is as follows. In third would be the Los Angeles Kings: they have many offensive stars and prospects to trade. In second would be the Boston Bruins. Burke wouldn’t be able to pass on reuniting Kessel with Savard or Ryder. My favorite trade oppertunity for Burke would be the San Jose Sharks. The amount of top six worthy fowards, prospects, and draft picks don’t even come close to any other team out there.

A deal is expected between 11:00 tonight and midnight. Will the favorite, San Jose, acquire Kaberle or will another team make an incredible offer Brian Burke won’t be able to decline? Only time will tell…

Update (9:10pm): San Jose & Boston are leading (as predicted by yours truely) Kaberle sweepstakes. Washington, Colorado, Tampa, & LA have made late pitches trying to acquire him as well.

Update (10:10pm):
Tampa Bay is making a very strong push now with Ryan Malone being the centerpiece of trade. He has a no-movement clause also.

Update (11:55):
Brian Burke believes Kaberle will remain a Leaf after the midnight deadline.

Update (12:00pm):
Thomas Kaberle will remain a Leaf. Burke must not have gotten deal he wanted.